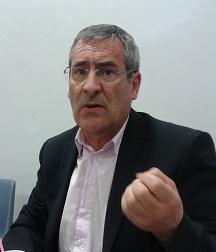 Professor Giles Boeuf, President of the National Museum of Natural History at Paris, pressed passionately for the public to become aware of the interconnectedness of living things and their environment.

In a presentation at the Alliance Française auditorium at Bengaluru, India, Professor Giles Boeuf pressed passionately for increasing public awareness of the interconnectedness of living things and their environment – the only way to check relentless exploitation of the natural world.

Professor Boeuf is President of the National Museum of Natural History at Paris since 2009 and Professor at the Pierre and Marie Curie University and at the Collège de France,

In the course of an outline of the evolution of biodiversity, Prof Boeuf said: “Science cannot be the property of scientists, it belongs to all people and they must participate.”

From the early chemistry nurtured in the geological variety of the planet, came the first scraps of replicating genetic code and the first living things. The oldest sedimentary rocks that contain carbon from biological origin are dated at 3,850 million years ago. Fossil remains dated at 3,500 million years ago have show evidence of cyanobacteria, also known as blue-green algae, an organism that gets its energy through photosynthesis, or using the sunlight to form organic molecules from water, as a source of negative ions to split carbon dioxide, releasing oxygen.

Till cyanobacteria appeared, life processes were based on the reactions of hydrogen sulphide gas, rather than water, and there was no atmospheric oxygen. The entry of cyanobacteria tapped the resource of the oceans and cyanobacteria multiplied and thrived.  But the great change was that now oxygen was generated.

During the first millennia, the oxygen released by photosynthesis was consumed in oxidizing dissolved iron. But when all free iron was used up, oxygen started building up in the atmosphere. As the existing life forms were also oxygen intolerant, the oxygen build-up set off one of the greatest extinction events in the earth’s history. And at the same time, rising levels of oxygen cleared the atmosphere of methane, a greenhouse gas, and the earth cooled, to create the great glaciation event of 2,400 million years ago.

But with rising oxygen levels, aerobic, or oxygen using organisms evolved and multiplied apace, and these began using up oxygen, till there was a balance of the production and consumption, with a steady 21% oxygen content in the atmosphere.

This condition was reached about 100 million years ago, after a very long time for aerobic life forms to evolve and there grew a vast multitude of species, plant and animal, land based as well as aquatic. This may hence be considered the first instance of a global web of interconnected bio-systems assuring an aspect of stability of the environment.

Prof Boeuf explained that evolution took four crucial steps, for the emergence of biodiversity, before life moved out of the oceans.

The first of these was the development of the nucleus of the cell, by the growth of a membrane, to enclose the nucleus within the cell.

The second was the capture of cyanobacteria by cells, which became components of the cell, like little cells, with their own DNA, within the cells.

And the third was the emergence of multi-cellular organisms, which happened by about 2,100 million years ago. And then came the greatest step – sexual reproduction, where there is a division and recombination of genes, or genetic mixing, rather than just replication.

“All individuals are different. A population equipped with sexuality evolves much faster and encourages an ‘arms race’ (of changes and responses) among parasites and their hosts”, says Prof Boeuf.

Sexuality thus paved the way for new traits to arise and flourish separately, to create new species and vastly more nodes in the matrix of connections and alternate connections of inter-dependence, to make for a biosphere of unprecedented robustness and resilience.

Between the land and the sea, it is the sea that is more uniform by far. The open sea has shown extraordinary stability for the last 100 million years at least. ‘pH’, which is the level of acidity, osmotic pressure and salinity, temperature, hydrostatic pressures of the depths, dissolved gas content, remain constant over thousands of kilometres.

This uniformity, which is maintained by biodiversity, is in fact not favourable to growth of new species. In contrast, conditions on the land are fragmented and have led to greater variety of species.

The sea is known to have only some 13% of the known species. This may be an underestimate, as there is still much to be discovered about the sea. But there are still over 250,000 known species in the sea, and the important thing is that their mass is huge.

Drifting weeds in the sea, called phytoplankton, for instance, account for 50% of the productivity of the planet. The biodiversity of the sea, although less than that of the land, has a great bearing on making sure that conditions on the earth remain suitable for life, as we know it, to continue.

Human populations have been exploiting the riches of the sea for thousands of years. Although the resource is mostly renewable, the present levels are so high that questions of sustainability have been raised. The FAO estimate is that 176 million tones of aquatic produce are harvested every year and large numbers of species are reported to be rapidly going extinct.

Apart from living species, the sea is also a source of chemical molecules of pharmaceutical and Industrial value. This apart, the mechanisms in the sea provide us with templates for research or new, bio-inspired industrial processes.

The current levels of exploitation and pollution of nature are seen as rapidly dismantling this framework, assembled over millions of years. The destruction of the great library of Alexandria may be dwarfed by the loss of information developed over thousands of years, which is being lost every day due to destruction of species.

The greatest absorber of CO2 emissions, from all sources living and non-living, is again the sea. But the rising levels of CO2, caused by human activity, would lead to acidification of sea water and elimination of great numbers of species that have adapted to rock steady pH levels for centuries.

Prof Boeuf gave a number of examples of noted species of plants, insects and animals of scientific, medical or industrial value, that had gone extinct or were on the point of doing so. His mission, he said, was to tour the world making presentations before people, so that people might become aware of what their lifestyle was doing and the value of what was being destroyed. The drive to make living sustainable was not likely to succeed through Government action or business initiatives, he said.

Prof Boeuf is on several international committees, of the UN and otherwise, and is adviser to the Government of France for the forthcoming world conference on Climate Change. But he sees little that may come from the talks, which, he says, may be a repeat of earlier Climate Change conferences.

The real initiator of change, a ‘leap over boundaries’ or sursaut, as he put it, would have to be civil society, the common people. And scientists need to empower the common people by making science accessible to them. The National Museum of Natural History in Paris had great engagement with the public it served. The museum has a collection of 70 million species with a herbarium that houses 8 million varieties of plants. Every day, there are as many as 30,000 communications, by telephone or by email, that are received from all kinds of people, to provide new information that enriches the museum.

“If we have 10,000 people who watch butterflies or birds, this translates into one and a half million hours of watching on behalf of the museum,” says Prof Boeuf by way of explanation of what it means to get the public to participate in science activity.

The writer can be contacted at simplescience@gmail.com