The benefits of philanthropic funding 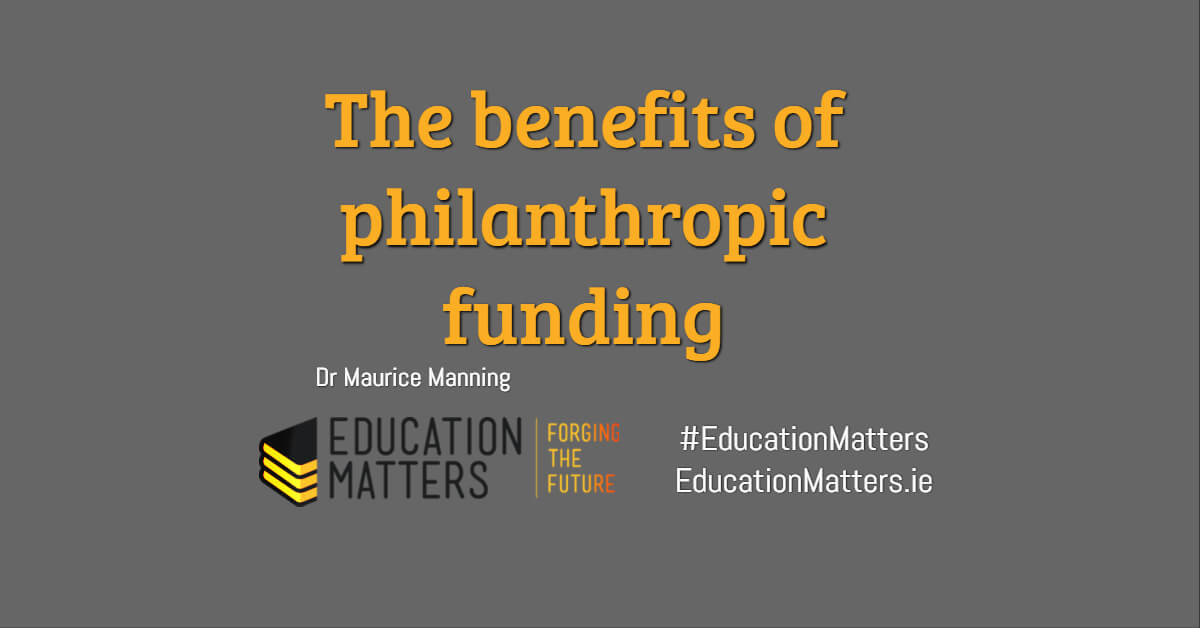 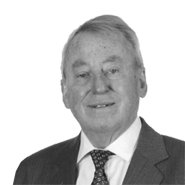 In this article, published in Ireland’s Yearbook of Education 2017-2018, Dr Maurice Manning discusses the benefits of philanthropic funding for universities. He demonstrates how such funding, when married with public investment, enables universities to create cutting-edge infrastructure and to compete on the world stage.

In planning strategically for the future, political decisions are needed on the extent of the Irish state’s contribution to funding our higher education system. However, if the system is to be enabled truly to deliver for our students, for Irish research and for Irish society, the decisions on funding must acknowledge that mixed funding regimes are the norm across most higher education systems globally1 and that an element of private funding will be essential to the wellbeing of Ireland’s universities and colleges.

It is not a question of private funds replacing the public purse for essential public provision, but of complementarity to enable strategic goals to be met in a sustainable way.

NUI represents a majority of the total student body in the Irish sector and we are proud of our national and international reputation for quality teaching and learning; research and scholarship and economic, social and cultural impact.

The 2016 Cassells’ report into the future funding of Irish HE2 estimated that €5.5bn capital investment would be needed over the 15 year period from 2016 onwards, simply to meet student-related teaching and learning requirements in terms of buildings and supporting technological requirements.

It is clear from current state capital spending plans that exchequer investment alone will not come near this sum. As the Joint Oireachtas committee on Education and Skills continues to consider the findings and recommendations of the Cassells’ report, it is timely to remind ourselves of the major benefits already gained by NUI students, academic faculty and staff by virtue of private donations to our universities and recognised colleges.

NUI’s constituent universities and the Royal College of Surgeons in Ireland (RCSI) owe an enormous debt of gratitude to the extraordinary generosity of Irish-American Chuck Feeney through his charitable foundation, Atlantic Philanthropies (AP).

The total financial contribution of €231.5M3 into NUI institutions’ capital funding programmes enabled major advancements, and Chuck Feeney’s remarkable legacy provided a very tangible base for future success and development funded by new benefactors who have since responded to the considerable efforts of the universities and their Foundations.

It must be acknowledged that these successes are hard won. Funding from private donors ranges from hundreds of small but annual contributions made by hundreds of alumni on foot of alumni campaigns, to the large, one-off “lead gifts” made by high net-worth individuals.

Regardless of the amount, attracting and sustaining private funding happens as a result of significant university resources invested in alumni relations offices and charitable foundations, deploying sophisticated marketing techniques and the development of legal, financial and technical expertise.

Success also requires expertise from outside of the institutions themselves, typically via the Boards of university foundations – comprising individuals with a range of business, industry, financial, social and cultural expertise.

At a strategic level, it is undoubtedly when collaborative initiatives between private benefactors, state capital grants and competitive research funding come to fruition that major impact on the strategic development of a university can be demonstrated.

In 2013, UCD opened the O’Brien Centre for Science, a world-class facility for teaching and research across many of the university’s broad-ranging science subjects. Denis O’Brien, Irish businessman and entrepreneur provided the lead “gift” for the centre; one of a number of gifts from a range of private benefactors whose names are displayed on the wall of the impressive atrium.

Denis O’Brien provided the lead “gift” for the Centre for Science.

On a day to day basis, the scientists in this centre are competing – and winning – research contracts from national and international programmes that require full use of the centre’s facilities and equipment.

“Private funding allows us to go that extra mile and to create cutting-edge infrastructure that can compete on the world-stage. It is crucial to allow the university to leverage vital funding from government and to deliver on bold plans.”

This point – that private funding works best when married with public investment – is clearly made in the National Strategy for Higher Education to 2030 (HUNT report), which states that “any credible effort to expand the role of philanthropic funding is critically dependent on the continuation of sustained public investment – this reassures potential benefactors that they are funding additionally rather than replacing an exchequer contribution”. 4

UCC’s Plus Programme for disabled students

UCC’s Plus Programme is majority-funded by UCC friends and supporters.

UCC is particularly proud of the range of technology and other supports provided for students with physical and intellectual disabilities. Dr Jean van Sinderen-Law, Director of UCC’s Development and Alumni Relations explains:

“For us in Cork, it’s about more than buildings – we have used gifts from generous individuals to restore and promote items of cultural heritage, the Great Book of Ireland being a recent prime example. Crucially, the generosity of our alumni and friends makes it possible for us to provide best-in-class financial supports for students who have made it as far as university in spite of disadvantages arising from disabilities and other constraints”.

Maynooth University also highlights the growing link between private funding and an enhanced student experience. As part of its approaching 21st birthday in 2018 as an NUI university, Maynooth is now launching its Annual Giving campaign. While also funding other projects of strategic importance to the university, the primary purpose of the Annual Giving programme will be to fund access bursaries and scholarships, and specifically to help support students like Leon Diop.

Leon graduated in autumn of 2017 with a degree in Psychology and is the first in his family to attend university. Serving as the new 2017-18 President of Maynooth Students’ Union, his campaign centred on social justice issues. He grew up in a one-parent family, the son of an Irish mother and a Nigerian father, and attended St Mark’s Community School in Tallaght where his guidance counsellor encouraged him to apply to university through the Higher Education Access Route (HEAR) scheme.

Since its establishment in 1998, Galway University Foundation has raised over €145 million directly from philanthropy, leveraging significant additional matching funds, thus enabling over €200 million of investment for flagship university buildings.

In 2017, the university opened the O’Donoghue Centre for Drama, Theatre and Performance, a €5.5m investment to transform a former limestone 19th century textile mill, into a state-of-the-art theatre facility for NUI Galway drama students, including Ireland’s first LED theatre lighting system. The Centre recently scooped the winner of the Public Choice award at the 2017 RIAI Irish Architecture Awards.

Maynooth University is proud to have the highest percentage of students from disadvantaged and underrepresented populations of any university in Ireland at 30%, and the highest proportion of students in receipt of a grant in the university sector, at 49%. Securing additional private funding will further enable Maynooth to provide world-class supports and services to these students.

Our universities and colleges must be enabled to seek additional funding from private sources.

As Ireland’s Higher Education sector embraces record student enrolment in the decade to come, and continues to attract highly competitive research funds globally, we must collaboratively support the efforts of our institutions to diversify their funding sources and enhance and ensure quality. NUI is proud of the work of its constituent universities and colleges in attracting substantial funding to complement that provided by the State.

We believe that the government must continue to provide substantial funding for higher education. However, while acknowledging the need for a robust regulatory framework, in a growing sector our universities and colleges must also be enabled and encouraged to seek additional funding from private sources, both in Ireland and elsewhere. This is essential if higher education is to enjoy the levels of investment necessary to remain internationally competitive.

Getting the balance right

If we get the balance right, Ireland will be able to provide, for its growing population, education and research opportunities at a level comparable to those available in other countries at a similar level of development, and higher education will make a full contribution to social, economic and cultural advancement.

For more on funding in Third level check out this piece by Brian Mooney “Top quality education system requires higher spending” (2016) and this piece by Jim Miley, Director General of the Irish Universities Association (IUA) on how Budget 2019 must be used to inject essential resources into our universities – “Universities seek an increase of €130m in core funding” (2018).