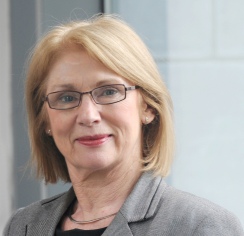 This day one week ago, the Minister for Education and Skills Jan O’Sullivan launched the most significant reform of Leaving Certificate grades and CAO points in more than two decades. Proposed changes include:

A main change proposed by the Minister is to award students who score 30-39% on the higher level paper a small number of points (to be determined in September). Currently, such students receive 0 points.

Q: Should students who are at risk of scoring less than 40% on a higher level paper not just take the ordinary paper instead?
J: …This isn’t about who passes and who fails. It’s about what points you get for entry into college. So if you get a lot of points for an A grade in a subject at higher level and you get this particular grade (between 30-39%) in another subject at higher level carrying a very small number of points, they are all added in terms of access to college. It’s about points. It’s not about deciding who’s failing and who’s passing.

Q: What kind of feedback have you received from parents, teachers and educational bodies in general towards the proposed changes?
J: There has been a lot of consultation. It has taken four years to get to this point and we’ve had consultation all the way along the line at post primary and at higher education level. So this has been a collaborative project. All the universities and institutes of technology have to be involved in agreeing the proposed new points’ scheme. And the fact is that’s not finally agreed yet because it has to go to the individual colleges through their academic counsels before it’s finalised in September.
There has been collaboration all the way along. The feedback we’ve got is I suppose largely incidental in that I’ve got things like tweets, emails and so on. Some for, some worried about the issue you raised about giving points for grades between 30-39%. But I hope that we’ve explained that this isn’t about a particular cut-off point where you’re failing or you’re a success. It’s really about rewarding people in accordance with what they do succeed in doing and with their level of ability.

Q: Could you talk a little bit about how the changes in CAO points margins affect the number of college places decided by random selection?
J: The reason for what is called the non-linear progressive nature of the points is, at the moment you can only get points that are multiples of five, i.e. 445, 450, 455 points. However with this new system you can get points anywhere  up along the scale because there’s a differential of ten between the very top grades and then it goes down to 9,8,7…
What that means  is that students will be able to get different amounts of points and it won’t just be multiples of five. So it will be less likely that students looking to do the same course as their first choice will get exactly the same points. In this scenario you’ll have fewer people subject to random selection.

Q: Speaking to the CEO of Educate Together Paul Rowe, he highlighted the need for students to come out of secondary school with practical skills for life beyond simply knowing how to pass exams. In this vein, do you think there’s merit in Labour Party Councillor Dermot Lacey’s comment that CAO points should be extended to recipients of the Gaisce awards which, in his words, reflect “real social and personal achievements”?
J: Well, I think that we should certainly value organisations such as Gaisce which recognise practical skills and collaborative work. The difficulty is that the higher education colleges – which ultimately own the points system – decide on what the requirements are to get into their separate courses. So the Examinations Commission would have to be involved in the marking and verifying of Gaisce Awards if they were to be awarded points.
The reason why, for example, we are trying to broaden the Junior Cycle assessment system is precisely because we want to reward other learning skills, intelligences and other abilities that young people have but I think that it’s more likely, say in the case of Gaisce, for it to be side by side with the Leaving Cert rather than the State Examinations Commission standing over the Gaisce Awards.
Certainly I am absolutely in favour, that’s why I’m trying to reform the Junior Cycle and there have been all sorts of proposals in terms of the Leaving Cert and some subjects do obviously have practical exams, for example orals in languages. So we’re trying to move towards that but as you can see from the difficulty I’m having from the teacher unions to agree on the Junior Cycle, moving to that has to be done by way of discussions with the education partners.

Q: So do you think there’s an over-emphasis on one major end of term exam in our system, even with the various forms of continuous assessment and course work at senior cycle?
J: (laughs) Yes I do, I think we’re moving upwards but we need to get through this impasse at the moment with the Junior Cert. I think there have been some reforms also in the Leaving Cert. I was certainly in favour of constantly ensuring that we are caught up wherever we can.

Q: On a side note related to the Leaving Cert, does the practise of awarding bonus points for subjects like Maths create an unfair hierarchy of subjects?
J: Yes. The extra bonus points [for Maths] were brought in specifically as part of a programme to increase the participation in Maths at higher level. It was done with a very specific purpose in mind and it has been successful in that regard. I do think we need to be careful – we can’t be doing that for a whole lot of subjects.
I presume it [bonus points for Maths] will continue to be under review but we are not supposed to change it at the moment.

Ken Glennon is a student of MA in Journalism at NUI Galway, on placement with Education Matters