In response to the digital divide experienced by students in DEIS schools, Trinity Access, in partnership with Camara Ireland, developed Tech2Students. 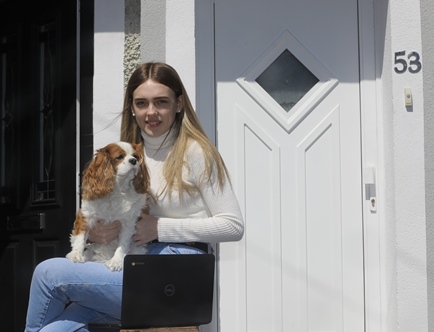 School closures due to COVID-19 highlighted the stark digital divide between students from different socio-economic backgrounds. It showed that this divide is real and remains a huge problem for second-level students, those in direct provision, and adult learners in marginalised communities. Fifty-eight percent of students attending DEIS schools experience disadvantage owing to lack of access to broadband or a suitable learning device.

Phase 1
Phase 1 of the Tech2Students campaign, launched by Trinity Access in April 2020 in partnership with Camara Ireland, raised over 300,000 euro and delivered over 1,000 devices to DEIS schools. However, a list remains of over 60 schools and organisations that urgently need digital devices for their students.

“Tech2Students has ensured that students who are financially vulnerable are not put at a greater disadvantage. Pre-COVID access to a device was a luxury and not an essential part of school life. Now it has rapidly climbed the ranks to be a vital tool for students to succeed in education”.
Blakestown Community School, T2S recipient

Phase 2
Phase 2 of the Tech2Students campaign has now been launched, this time with additional partners – NUI Galway, the NUIG Access Centre, the Galway City Partnership, and the Galway Chamber. And this time the project is going nationwide.

Please support
T2S Phase 2 is asking the public and businesses to get involved by donating their used laptops and Chromebooks or by giving a financial donation that will allow the purchase of refurbished laptops for students.

If you, or anyone you know, wishes to donate a device, fill out this form and a Tech2Students team member will be in contact with you shortly.

Donations are being accepted at the Tech2Students workspace in Dublin, and monthly collections in the Dublin and Galway city and surrounding areas can also be facilitated. Please contact tech2students@ta21.ie if you have any questions and/or would like to get involved.

SOURCE: Materials provided by TA
Note: Content may be edited for style and length.