‘A reader’s interest is often captured by a difficult relationship in a text.’

The difficult relationship that we will focus on is the relationship between the main protagonist, Prince Hamlet and his uncle, the murderous usurper, King Claudius. It is a most appalling, unnatural and disturbing relationship, the opposite of what a normal, filial relationship should be. An uncle should be a supportive and protective influence in the life of his nephew. However, Claudius is Hamlet’s principal antagonist in the play. He murders his brother, Hamlet’s father, King Hamlet of Denmark. Then, not very long after he has committed this heinous, unnatural act, he marries Hamlet’s mother, and his murdered brother’s widow: Queen Gertrude.

We can agree with the statement: ‘A reader’s interest is often captured by a difficult relationship in a text.’ It is the extreme difficulty and destructiveness of this uncle-nephew relationship that intrigues, shocks and disturbs. It is also the key relationship around which the entire revenge tragedy revolves.
One of the first scenes that compels the audience’s interest in the relationship between Hamlet and Claudius does not directly involve Claudius. It is Act 1, Scene 5 when the murdered king’s ghost appears to Hamlet to tell him that his beloved father has been murdered. The ghost also lays a heavy burden on the young Hamlet, to avenge his father’s murder:

Ghost
If thou didst ever thy dear father love—

Ghost
Revenge his foul and most unnatural murder.

However, as we and Hamlet are just absorbing the shocking news that the king has been murdered, when perhaps it cannot get another worse, we are appalled to hear from the ghost that it is actually Hamlet’s uncle, Claudius who has perpetrated the evil act, murdering his brother while he slept. He has also used the most underhand and insidious methods to murder his brother, pouring poison in the sleeping king’s ear and damning him to a purgatorial afterlife. 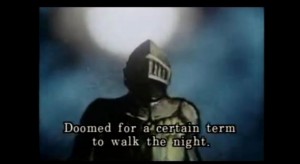 Ghost
Wouldst thou not stir in this. Now, Hamlet, hear:
’Tis given out that, sleeping in my orchard,
A serpent stung me, so the whole ear of Denmark
Is by a forged process of my death
Rankly abus’d

The dramatic effect of the scene is increased by Shakespeare in his use of the metaphor of the serpent in the garden. This reminds us of the snake in the Garden of Eden; the king’s murder at the hands of his brother is so devastating and evil that it is like another Fall of Man:

Ghost
The serpent that did sting thy father’s life
Now wears his crown.

Ghost
Ay, that incestuous, that adulterate beast,
With witchcraft of his wits, with traitorous gifts—
O wicked wit and gifts that have the power
So to seduce!—won to his shameful lust
The will of my most seeming virtuous queen.

What is even worse is the fact that not only has Claudius murdered Hamlet’s father, and with it denied Hamlet’s succession, he has also married Hamlet’s mother, and the murdered king’s wife, the beautiful Queen Gertrude. The ghost accuses Claudius of adultery and incest. The ghost exclaims how it is made all the worse by Claudius’ inferior attributes, which do not compare with the natural majesty of the murdered king: “Upon a wretch whose natural gifts were poor To those of mine!”
Claudius has completely perverted the very nature of how a brother, brother-in-law and uncle should behave. The words of the forlorn ghost are apt: it is truly “murder most foul/most foul, strange and unnatural”. 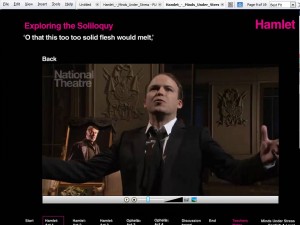 Although he will be unsure afterwards of whether the ghost speaks the truth, Hamlet agrees to avenge his murdered father, and puts an “antic disposition on” to conceal his motives. The dramatic tension in the difficult, fraught and unnatural relationship between Hamlet and his uncle Claudius escalates in Act 3, Scene 2, ‘The Mouse-trap Scene’, and the play within the play. A troupe of actors is visiting Elsinore and Hamlet has them stage a play ‘The Murder of Gonzago’, which will re-enact his father’s murder.

Hamlet uses the opportunity to assess Claudius’ reaction, which Hamlet hopes will provide evidence of his culpability/guilt. As the play within the play reaches its climax, Hamlet provides dramatic commentary: “’A poisons him i’ th’ garden for his estate. His name’s Gonzago, the story is extant, and written in very choice Italian. You shall see anon how the murderer gets the love of Gonzago’s wife.” Hamlet’s plan works. Claudius is so deeply affected by the play that he dramatically gets up and leaves. For Hamlet, it is evidence that the ghost has spoken the truth; Claudius is guilty of fratricide and regicide.

Hamlet
What, frighted with false fire?

Queen
How fares my lord?

Polonius
Give o’er the play.

King
Give me some light. Away!

Hamlet’s best-friend Horatio helps to corroborate the disinherited prince’s now certain belief in the ghost, and Claudius’ guilt following the play within the play. This “mirror up to nature”, mini-play has indeed had its effect, re-enacting Claudius’ poisoning of his brother, and Hamlet’s father, the rightful king.

Hamlet
Upon the talk of the pois’ning?

Horatio
I did very well note him.

Claudius now conspires to kill his nephew: Hamlet must die. The revenge tragedy reaches its bloody and tragic climax in the duel scene where Laertes’ poison-tipped sword fatally wounds Hamlet. In a further twist in the tragedy, Hamlet uses the same sword to wound fatally his villainous uncle: “The point envenom’d too! Then, venom, to thy work.”
To seal his fate, Hamlet makes the king drink from the cup that Claudius has poisoned: “Here, thou incestious, murd’rous, damned Dane, Drink off this potion!” It is a moment of poetic justice: “He is justly served, It is a poison temper’d by himself.”
At the end, Horatio presides over a scene where Claudius, Hamlet, Gertrude and Laertes all lie dead; Laertes’ sister Ophelia and their father Polonius having previously met their tragic ends. The fate of Denmark now rests in the hands of a foreign power, and the Norwegian crown prince, Fortinbras:

Hamlet
O, I die, Horatio,
The potent poison quite o’er-crows my spirit.
I cannot live to hear the news from England,
But I do prophesy th’ election lights
On Fortinbras, he has my dying voice.
So tell him, with th’ occurrents more and less
Which have solicited—the rest is silence.

It is true that ‘A reader’s interest is often captured by a difficult relationship in a text.’ The fraught, destructive relationship of Claudius and Hamlet captivates and holds our interest. More than that, it appals and shocks us, twisting and perverting the natural bonds of family between an uncle and his nephew. The outcomes are devastating, not just for the first family of Elsinore, but for the entire nation state of Denmark.