NUI pays tribute to Brian Mooney on his 65th birthday

For a very long time, Brian Mooney has provided a tremendous service to students as they contemplate the options available to them on leaving school. 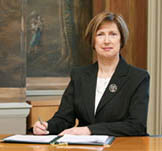 Higher education has expanded and changed at such a great rate, the range of choices has become so wide, and the entry requirements have become so diverse, that they can bamboozle the uninitiated.

Brian has expertly demystified the process of applying for higher education programmes, given valuable information to students, schools and parents, drawn attention to deadlines and specific requirements that might easily be overlooked, and to alternative pathways towards admission.

He has also highlighted the excellent opportunities available in further education and through the new apprenticeships.

He can be relied on for sound advice at a time when worried students and their parents need it most.

It is no exaggeration to say that through Brian’s newspaper column and his many public appearances, he has become the face of guidance counselling in Ireland.

The National University of Ireland (NUI) has been pleased to be associated with Ireland’s Yearbook of Education, one of Brian’s other special projects.

The annual launch in NUI of this wonderful compendium of information and insight on the year in Irish education is always a great gathering, bringing people together from across the entire education spectrum.

Brian Mooney: “deeply embedded in the fabric of education in Ireland”

Brian Mooney is in his 43rd year as a member of the teaching staff at Oatlands College Mount Merrion, where he has been Guidance Counsellor since the late 1990’s.

He entered Oatlands College primary school in 1961, making his association with the college a life-long one, currently stretching back 58 years.

Brian was coordinator and lecturer on the Higher Diploma and Master’s in Religious Education in UCD from 1986-2002.

In parallel with his lecturing role in UCD, he continued teaching in Oatlands College. He qualified as a Guidance Counsellor following further studies in UCD in 1996.

In 2002, Brian was appointed as a regular writer on Education for The Irish Times.  For the 16+ years since then he has been a regular columnist and education analyst with The Irish Times, and in addition he contributes a weekly column for the Education Page on Tuesdays.

Brian has had several books published over the years, including his most recent one, Start Your Career Journey Here, published by the Educational Company in 2014.

Brian is Managing Editor of Ireland’s Yearbook of Education, a position he has held for the past four years. Published by Education Matters, the Yearbook is Ireland’s premier education compendium, documenting and interpreting the big issues of the year in all sectors of education, from Pre-School to Fourth Level research.

The Yearbook is launched each December in the National University of Ireland (NUI) by the presiding Minister for Education and Skills – this year by Minister Joe McHugh. The latest edition (2018-2019) is available in print and it can also be accessed free online.

In April 2018, Brian was recognised for his “Lifetime Contribution to Education” at the National Teacher of the Year Awards, in Trinity College Dublin. This prestigious award celebrates outstanding contributions by second-level teachers who go “beyond the classroom to establish a lasting impact in their students’ lives”.

Brian was given this lifetime achievement award for his work in helping to guide generations of students on their career paths, as well as his contribution to education policy.

In a citation, Brian was described as “deeply embedded in the fabric of education in Ireland” through his career advice in The Irish Times and on TV and radio, as well as his work as Managing Editor of Ireland’s Yearbook of Education.