Intuition, Inventiveness and Resilience will see us through

This is not a new story, it dates back to 1970, but re-reading the Apollo 13 saga gave me renewed hope and faith in the intuitive inventiveness and resilience of human beings. The extract below recounting the story is taken from a prize-winning speech delivered by Marloes Telle for Jet Bussemaker, Minister of Education, Culture and Science, the Netherlands, at a symposium on Skills for the Future, organized by the Royal Netherlands Academy of Arts & Sciences, Amsterdam, the Netherlands, March 19, 2014.
—Bridget Reilly 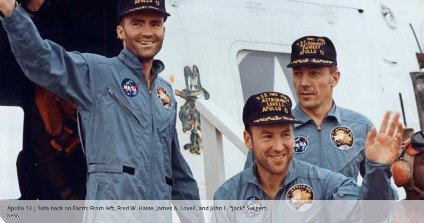 On April 11, 1970, Apollo 13 was launched from the Kennedy Space Center in Florida. Destination: the moon.

An oxygen tank had exploded, bringing the onboard production of electricity and water to a halt.

When disaster struck, Apollo 13 was still on its way to the moon. The three astronauts were 200,000 miles from Earth, and they were in trouble. Oxygen levels were declining and power was at a minimum.

The crew decided to shut down the entire command module and move to the lunar module which was still attached—even though it had never been developed for this purpose.

To have a chance of survival, the heating had to be turned off and the astronauts needed to replace the lunar module’s air filters with the filters from the command module. But the modules had been built by different manufacturers and the filters were not interchangeable. The astronauts improvised a solution with cardboard and sticky tape.

There was another problem: returning to Earth. With the main engine out of commission, the astronauts had to use the lunar capsule’s engine to manoeuver into orbit around the Earth. But they were unable to use the navigation computer and the lunar module’s control computer was not equipped to steer the 30-ton command module.

The crew now had to steer and implement course corrections manually, plotting their position in relation to the stars and the position of the Earth.

Once they had re-entered Earth’s orbit, they then had to crawl from the lunar capsule – which was not built to withstand a re-entry into Earth’s atmosphere – back into the crippled command module.

They succeeded. On April 17, Mission Control in Houston announced splashdown in the Pacific Ocean near Samoa.

All of the astronauts survived.

The pilots of Apollo 13 were extremely well trained. Commander Lovell had three space missions and almost six hundred spaceflight hours under his belt. The entire crew had gained plenty of experience on test flights. And yet, 200,000 miles from home, they found themselves in a situation that tested not only their knowledge but also their skills to the very limit.

It took all the creativity, collaboration, and communication they had to give. It took every last ounce of their courage, endurance, and flexibility. It called on every human quality they possessed.

In that light, it is hard to see the Apollo 13 mission as a failure.

Rather it is a wonderful example of man’s ability to tackle unprecedented problems in uncharted territory. How human resourcefulness and technology interact. And how knowledge, skills, and training go hand in hand.

This brings me to the reason why we are here today. Though we have no idea what the world will look like in thirty years’ time, it’s a safe bet that we will need to rely on the same skills that stood the Apollo 13 astronauts in such good stead. It is a challenge faced not only by young people but also by adults.

In today’s society, it is no longer about training for a particular career; we are all engaged in lifelong learning.

In order to set the course of the Starship Education, we will have to enter into a meaningful dialogue about our purpose, our destiny. And about the route we will take to get there.

In recent years, we have seen a strong focus on literacy and numeracy. These areas remain important. But there is so much more to learning. Students who have difficulty with such basic skills still have a great deal to offer. Tapping into that potential calls for a broad approach to learning…

You can read the rest of this speech, ‘Skills for the Future’, on page 25  https://www.zumwaldandcompany.com/wp-content/uploads/2014/10/2015_CiceroAwardsWinners.pdf

Surviving As a Learner during the Global Pandemic