Institute of Technology Carlow marks with gratitude a 50-year milestone

This autumn, Institute of Technology Carlow reflects with gratitude as it marks a 50-year milestone since it first offered higher education programmes to learners across the southeast.

1970 was the year the Beatles broke up, and the year anti-Vietnam war students protested on college campuses across the States. Closer to home, 1970 was the year Dana won the Eurovision, President Nixon visited Ireland, and the Institute of Technology Carlow – then known as Carlow Regional Technical College (RTC) – first opened its doors to students.

This autumn, the Institute of Technology Carlow marks a 50-year milestone since it first offered higher education programmes to learners across the southeast. There have been many changes in that half-century and a great many achievements by the Institute in its journey to becoming one of Ireland’s largest institutes of technology.

Since its founding, the Institute of Technology Carlow has grown from a regional technical college to an institute of technology with over 9,000 learners pursuing more than 200 programmes of study, from certificates to doctorates. The college has grown in size and in reputation to become one of Ireland’s most respected higher education institutions and an engine of growth for the southeast region with global alumni of more than 60,000.

“Earlier this year when we planned a programme to celebrate our 50 years, we never imagined that 2020 would be such an unforgettable year. The pandemic means that we will not mark our significant birthday in the way we had planned. We will however reflect on this institute’s journey over 50 years, its many achievements, and its legacy. We are now at a transformational time in its history as we move towards becoming a technological university in 2022.”

Opened on 22 September 1970 at a cost of £500,000, the first courses offered by the then Carlow RTC covered technology, science, and business, with special emphasis given to food technology, industrial processing, and instrumentation. A two-year hotel management course designed for existing hotel employees cost £160 per annum, which included fees and accommodation. Job opportunities heralded for graduates at the time included computer programming, work-study specialist, quality controller, and company secretary.

John Gallagher, educated at Summerhill College in Sligo and University College Cork, was appointed the principal of the new regional college in January 1970. He is a chartered engineer and, prior to his appointment, was a senior lecturer at Liverpool Polytechnic.

John steered the Institute through its early years when the regional technical colleges were under the vocational educational committees, until they were placed on an independent basis by the Regional Technical Colleges Acts in 1993, and subsequently received ‘Institute of Technology’ status in the late 1990s. Mr Gallagher retired in 2003.

A 1970 newspaper article in The Nationalist, penned by broadcaster and Carlovian Olivia O’Leary, and titled A Yellow World in Carlow, quoted a young electrical apprentice who spoke of the advantages of studying at Carlow RTC. He commented:

“Country students don’t have to go to the cities, running the risk of losing their identity in an anonymous mass. We want to make people aware of the fact that the college exists for everyone and that there are classes and courses here that can be taken by people of any age”.

“This is going to be better than a university. It will be less impersonal because we have a better staff-student ratio”.

Fifty years later, the Institute of Technology Carlow is at an advanced stage in its trajectory to becoming a technological university, surpassing the original vision of its founders.

“In reaching 50 years, we thank the people before us who made this possible and we look to the future as Institute of Technology Carlow continues to evolve and lead.  We look forward to another 50 years of knowledge and innovation, of openness and engagement, of ambition. 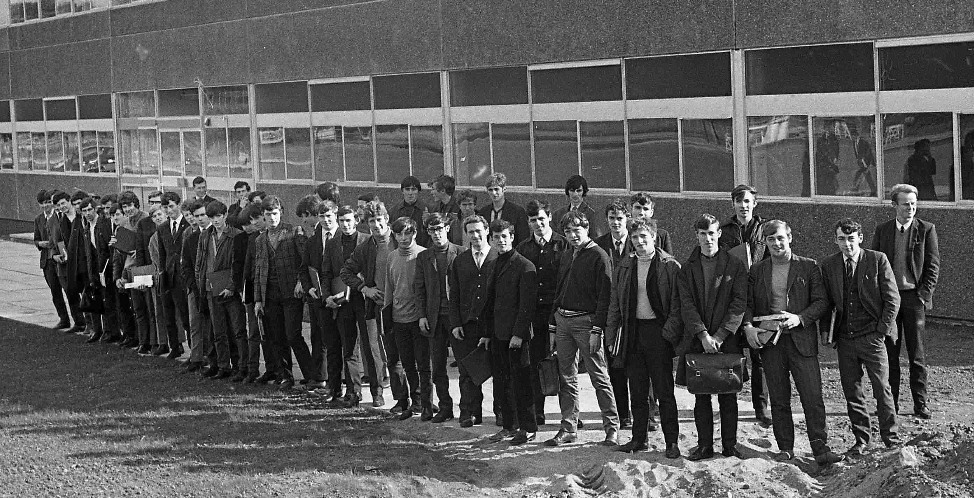 Photo of the first intake of students at the then RTC Carlow in 1970. Pic: Karl McDonough.

Institute of Technology Carlow acknowledges and thanks The Nationalist and Leinster Times newspapers for access to their archives for its 50th-anniversary project.

SOURCE: Materials provided by IT Carlow
Note: Content may be edited for style and length

IT Carlow issues statement on Exams and Assessments 2020