Education Matters team is delighted to support the #UpForSchool campaign 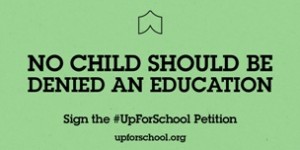 UpforSchool is a campaign aimed at getting 58 million children worldwide, who are not currently at school, into school. The campaign is seeking 2 million signatures worldwide to convince world leaders to make this goal a reality for all children.

The #UpForSchool global petition will be presented to world leaders at the UN council meeting in September of this year.

According to Senator Healy Eames:

“I believe it is important for Irish citizens – be they children, teachers, parents, policymakers or politicians – to show solidarity with children across the globe who for reasons of fear, discrimination, lack of opportunity, terrorism, bias against the girl child etc. cannot or do not get the opportunity to go to school.”

The Irish campaign is calling for students, teachers and parents as well as the wider school community to come together to sign this important petition and be a voice of power and influence for the millions of children who have no voice.

The Irish petition can be signed at http://www.aworldatschool.org/upforschool/upforschool-upforlearning-join-the-irish-campaign

Visit the UpForSchool/Ireland facebook page for more information and how your school can get involved, or visit www.aworldatschool.org.