State or Student mindset must change 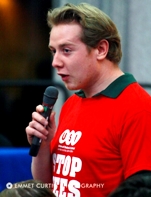 The run-up to General Election 2011 was a unique period time in Irish politics. The opposition, the public and indeed the entire world knew exactly how bad our fiscal situation was. All parties

It was in this context that Ruairí Quinn and Eamon Gilmore signed a pledge on  behalf of the Labour Party that if in Government after the election, they would not accept any increase in college fees or reduction of the Higher Education Grant.

At the time it was looking entirely possible that, for the first time ever, a single party Fine Gael government would be elected. This turned out not to be the case, with Labour showing a late surge and Fine Gael’s support dropping slightly back as if voters wanted Fine Gael tempered by Labour.

With over 200,000 students in Higher Education, plus the votes of their families and friends, I think it is highly likely that Labour owes its place in Government to those crucial thousands of votes that switched from Fine Gael to Labour on the basis of that pledge.

Labour knew well, or ought to have known if they could actually deliver what they signed up to in that pledge. Fine Gael, for its part, committed not to increase registration fees further.  Claiming, in a post election environment, that the situation is dramatically different from what they had been told is simply taking the Irish people for fools.

I know that there is a myth out there that we still have ‘free fees’ in Ireland. At €2,000, plus local college levies for sports and student facilities, Ireland currently has the second highest level of fees anywhere in Europe. Only the UK has higher fees and with their participation rate not much more than half of what Ireland’s is, it is easy to see what will happen if college fees increase yet again.

Loan schemes, graduate taxes and upfront fees have been implemented in different countries across the OECD and in almost every case they have been a disaster with either quality or participation rates declining dramatically, or the funding system needing to be constantly bailed out by the Government with graduates turning to emigration to avoid costly repayments.

In recent weeks there has been much debate surrounding our universities’ position in world rankings and while the recent slide is worrying it must be remembered that rankings are not a guide to the quality of graduates. For a small country with a population of just over 4.5 million people our higher education system plays a central role on the international stage and we must not make any short-sighted decisions that  may have long-term negative ramifications.

I believe that there does need to be a fundamental reform of higher education in Ireland. We need to embrace distance and online learning. The size, number and variety of our institutions need to be re-examined. We need to radically increase the number of non-EU students studying in Ireland. The National Strategy for Higher Education to 2020 lays out many of these objectives but these initiatives will take time to return on investment of resources.

Heretofore, third level funding has been a zero sum game. Many people in the sector see it as either the state pays or the student pays. This is simply not the truth and not a viable mindset. There are many other options from alumni foundations to meaningful engagement with industry. However, immense political will and buy-in on the part of the institutions will be required. Whether or not the establishment rises to meet this challenge is yet to be seen.

Not a week goes by where I don’t say goodbye to either a friend or family member who has been forced to seek opportunities abroad due to the current economic climate. Both my sister and my brother have emigrated seeking employment abroad, and I know this is replicated in tens of thousands of families across the country.

In our relatively short history, we have weathered recession after recession, and the dogged Irish spirit has always found a way to carry on. Independence, the Economic War, the Emergency, entering the EEC – the Irish people have always adapted. I know that it is possible to do it again. There are many tough decisions to be taken over the coming weeks but by choosing to invest in education, we will be able to foster a knowledge based economy and take advantage of every opportunity in the future.

To find out more about USI’s campaign or to get involved please log onto www.usi.ie or contact USI on info@usi.ie’