The School Musical – more than just a performance

Musicals can serve as content-rich resources for thematic learning 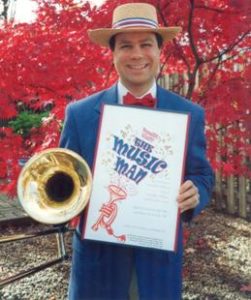 School musicals are often limited to only those students participating in the cast and crew of the production and the faculty staging the production. Students and faculty in their regular classes rarely do anything related to school musicals. This is unfortunate because musicals are rich resources for thematic and interdisciplinary learning. Educators can utilise concepts, themes, characters, settings, dialogue and songs in musicals to teach students thematically.

As the words suggest, thematic learning is based on choosing one or more themes or topics to drive instruction.  The shows that my school staged invited themes to foster learning, songs to learn, and settings to explore.  Each year, when the musical for the following year was announced, I would immediately research it for its main themes to help shape curricular integration.

Examples of themes in musicals

Educators and students can:
– become familiar with art works from popular culture
– utilise the premises of musicals in a similar fashion to literature
– explore musicals to master themes from various subjects
– encourage interdisciplinary learning
– be motivated by the liveliness of musicals and their musical scores

Integrating the school musical into the curriculum

I undertook a voluntary position at a high school in New Jersey, USA. The goal of our program was to integrate our school musical productions into the second level curriculum and support state curriculum standards. The Music Man integration was particularly successful in that it included 21 projects and lessons and encompassed several subject areas. Even with this success, there remains room for improvement.

I am sharing what I was able to accomplish so that other educators might also decide to explore ways to create even a more far reaching curricular impact and influence even more students and subject areas with their schools’ musicals or musicals in general.

I have undertaken musical integrations in my own classes and high school for 20 years. I began with Evita as a tie-in to my unit on Argentina in Spanish class. This type of integration then expanded to the high school where I teach. I integrated eight of our school musicals by creating study guides for teachers and then also for students.

I was invited by our musical directors to design lobby and cafeteria displays of projects and artwork tied to the themes of that year’s musical. Our work was entered into the Paper Mill Playhouse Rising Star Awards program first begun in 1996. We received the award for Educational Impact for all eight years.

Even without the competition element, musicals can enhance subject matter learning. Students’ projects could easily be displayed for the school and audience members to see. These can also be part of student portfolios.

The following questions are essential when integrating a school musical or selected musical:

Many schools are “putting on shows” or staging musicals. While staging a production is a gargantuan task in itself, with careful planning musicals can create an even stronger educational impact on students. Not only music and theatre students can benefit from musicals; students in a number of subjects can benefit by bridging a co-curricular musical to the regular second level curriculum.

Focusing on the eight integrations that I did at the high school level, I present the thinking behind integrating musicals based on themes and premises found in the musicals in addition to the musical scores.

Carousel
For Rodgers and Hammerstein’s masterpiece Carousel, we utilised Maine, New England, and the amusement park/carousel as themes for our displays. Lyrics from four songs from the score were used for a Spanish project that students did in groups. One student did ink drawings. A wide mural in vivid tempera paint of an amusement park depicted a carousel, a dunking booth, dancers and fair attendees.

Bye Bye Birdie
Fictitious Sweet Apple, Ohio, served as inspiration for our front lobby displays where the town was constructed. An appliance store, record store, mural, and heartthrob shrine appeared along with a traffic light. Footage from The Ed Sullivan Show played in the appliance store’s front window.

The Boys from Syracuse
The Mediterranean inspired our lobby display. A 24-foot long mural featuring a series of arches, terracotta roof, and grapevine adorned our circular wall. Plant life from the Mediterranean including one dimensional orange trees with cast photos appeared outside the auditorium doors. Portraits of four of the original Broadway creative team appeared along one wall: composer Richard Rodgers, lyricist Lorenz Hart, director George Abbott and choreographer George Ballanchine.

The Music Man
Music was the main theme used for The Music Man. Bunting appeared outside the auditorium doors and a painted mural of a front porch gave the flavour of rural Iowa in the cafeteria display. Twenty-one projects including a thematic quilt were represented in the curriculum.

Anything Goes
A nautical “ship” theme was used for Anything Goes. We featured a ship mural in the back lobby with cast members’ photos in the port holes. In the front lobby, silhouettes of sailors and the display case featured nautical items including an actual ship steering wheel.

Into the Woods
The Grimm’s fairy tale characters, the woods and music were main themes for Into the Woods. We featured a back lobby mural entitled “Once upon a time…” featuring Cinderella, Little Red Riding Hood and Rapunzel in front of a row of trees. The spooky lobby display case featured three-dimensional trees, starlight and related items including an original Playbill from the Broadway production of Into the Woods, our study guide a witch and a gingerbread house. On the cafeteria windows, we featured four fairy tale stained glass scenes.

The Boy Friend
The French Riviera and art deco were utilized as main themes for The Boy Friend as well as the 1920s time period.  The front display case featured a beach with real sand, terracotta covered white buildings, sea water depicted in colourful film paper and beach umbrellas. Sheet music from the Boy Friend score on coloured paper floated across the sky.

While these eight musicals are only a fraction of those available, they reflect the potential of using musicals to foster thematic learning. Lobby displays are a separate category in the Paper Mill competition; various displays were created also using our school musicals’ themes as inspiration.

Students benefit from units, lessons, and projects inspired by musicals. The themes, settings, characters, time periods and musical scores all invite thought provoking thematic learning. By using musicals for thematic learning in your own classes, you will likely find high student engagement, creativity, arts appreciation, school spirit and a deep understanding of what musicals have to offer the world.

Keith Mason, PhD, is a researcher and educator based in New Jersey, USA who specialises in language education, curriculum, phonetics, romance linguistics and musicals in the curriculum. He is the recipient of eight Rising Star Awards from the Paper Mill Playhouse in Millburn, New Jersey, USA for integrating school musicals into the second level curriculum.