Preparing Graduates for a Scientific Future 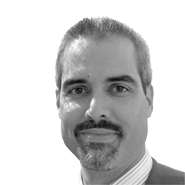 This article is taken from Ireland’s Yearbook of Education 2017-2018, Higher Education Chapter, page 314.  The conversation around science and STEM education is of great importance to Ireland with Science Foundation Ireland pushing for greater uptake of STEM subjects by students.

In 2018, Trinity College Dublin will launch a redesigned science programme, aimed at preparing graduates for a dynamic future in which scientific skills and thinking will be ever more important in an increasingly diverse range of careers.

We live in a rapidly changing world, one in which scientific proficiency and literacy have become increasingly important. The pace of scientific discovery and technological advances is ever increasing, providing tremendous opportunity for those prepared and equipped to avail of them, while also presenting society with important new approaches to tackling emerging challenges.

Science graduates are in high demand and have excellent career prospects.

Ireland has positioned itself as a knowledge economy, successfully building up a thriving hightech sector, with world-leading international and indigenous companies in information technology, pharmaceuticals, biotechnology, medical devices and related areas. Thus, science graduates are in high demand, and have excellent career prospects, not just in existing industries, but in new ones that we cannot even yet imagine. These will continue to transform all our lives in the unexpected ways we have witnessed over recent decades.

Revolutionary developments in areas like artificial intelligence, nanomaterials, precision genome editing, and brain-machine interfaces will provide great opportunity for those capable of taking advantage of them, thereby placing a premium on a scientific education. This will apply not only to those working directly in these areas, but also to those in related areas such as business, law, healthcare, agriculture, education, entertainment, and many others, which will also experience the impact of such advances.

The goal of science education in Trinity is not just to train the next generation of scientists, but also those who will work in other careers…

The goal of science education in Trinity therefore is not just to train the next generation of scientists, but also those who will work in other careers enabled by and impacted by advances in scientific knowledge. In doing so we hope to instil an understanding and appreciation of how science works in all our graduates and provide the ultimate in transferable skills – an ability to evaluate and synthesise evidence, think critically and learn rapidly and continually. In addition, the new Science programme will provide science students with the opportunity to engage with broader societal and ethical questions and to consider the responsibilities associated with scientific and technological advances.

The New Science Structure at Trinity

Over the past year, staff at Trinity College Dublin have come together to reimagine the undergraduate science education programme, focusing on the future needs of our graduates and resulting in new course structure, content, and teaching and assessment methodology. The objective is to provide our graduates with an education that equips them with the knowledge, skills and flexibility to avail of increasingly diverse career options arising from advances in science and technology. The redesigned set of science offerings at Trinity will be introduced in 2018.

There are now four entry routes, each focusing on one distinct area of science.

The signature development of the new Science programme is that there are now four entry routes, each focusing on one distinct area of science: Physical Sciences, Chemical Sciences, Biological and Biomedical Sciences, and Geography and Geoscience. Each stream leads to a wide choice of possible degree specialisations, which include those previously accessible only through direct entry, such as Human Genetics, Nanoscience, and Medicinal Chemistry. (Mathematics and Theoretical Physics will remain as additional direct entry courses due to their highly specialised nature).

Students will engage in a customised foundational curriculum in the first two years.

Within each stream, students will engage in a customised foundational curriculum in the first two years. This will centre on core modules relevant to each major subject domain, as well as mathematics, statistics, data analysis and computing modules. Students will also be able to take elective modules from the other streams or from related areas such as education, entrepreneurship, science communication, or the history and philosophy of science. 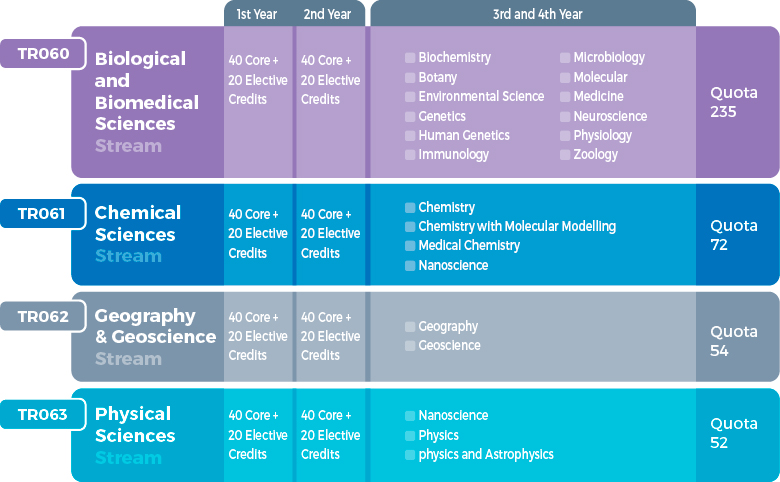 At the end of their second year, students will choose a degree subject in which to specialise.

At the end of their second year, students will choose a degree subject in which to specialise and are eligible to enter all those offered within their chosen stream. These span all areas of modern science and reflect the cutting-edge expertise of Trinity’s scientists. They range from studies on the subatomic scale to the exploration of the cosmos; from the design and development of new chemical entities to their application in medicine; from the inner workings of cells at the molecular level to the evolution of species over millions of years; and from the geological forces that shape our planet to the environmental and social dynamics of our own species.

Whatever degree subject students choose, they will be brought right to the forefront of knowledge in the particular field by world-leading scientists. In effect, they become members of a department in their third and fourth years, engaged in learning in small classes in a collegiate relationship with faculty members.

In effect, students become members of a department in their third and fourth years, engaged in learning in small classes in a collegiate relationship with faculty members.

Lectures, practicals and tutorials will focus on a practical understanding of the scientific method, its use in the development of fundamental concepts and its application in a wide variety of fields. Students will become skilled in designing experiments, evaluating scientific research, analysing data, assessing evidence for various claims, and synthesising knowledge across domains. The use of online and blended learning resources will facilitate a stronger focus on active engagement with and mastery of scientific concepts and methods. The new structure will also involve more formative assessment, with individual or collaborative coursework forming an important part of the learning process itself.

In their final year, each student will undertake a capstone research project.

In their final year, each student will undertake a capstone research project. It is at this point that they move from just learning about science to becoming practitioners, applying their scientific understanding and skills to an original problem. This affords an opportunity to learn how scientific research works in practice at the highest level, and to make their own contribution to the discoveries shaping our world. In some disciplines, students will be able to carry out their projects in clinical research labs in Trinity’s affiliated hospitals, in industry, or in collaborating institutions worldwide.

Trinity has a worldwide reputation for academic excellence and is ranked within the top 100 universities in the world. It has a rich scientific tradition, exemplified by alumni such as Ernest Walton, Professor of Physics, who received the Nobel Prize in Physics in 1951 for his work on splitting the atom, and by William Campbell, who received the Nobel Prize in Physiology or Medicine in 2015 for his discovery of a novel therapy against roundworms. This work, carried out at Merck pharmaceuticals, was a direct extension of his education in parasitology in the Department of Zoology at Trinity. Campbell was instrumental in convincing Merck to make this therapy available at no cost to developing countries, resulting in the effective treatment of hundreds of millions of people for the otherwise devastating disease of river blindness – as example of the profound effect that individual scientists can have on the lives of millions.

Trinity’s scientists continue to build on that tradition of discovery and impact of research on the world. Their achievements have been recognised nationally by strong support from Science Foundation Ireland and internationally by prestigious funding awards from the European Research Council, the Wellcome Trust, and other agencies. Trinity is the only university on the island of Ireland to be one of the 23 members of LERU, Europe’s network of world-leading research-intensive universities.

Trinity is one of the 23 members of LERU, Europe’s network of world-leading research-intensive universities.

Students will become part of Trinity’s community of researchers from all across the globe, training in world-class facilities, including dedicated research institutes and centres, such as the Trinity Translational Medicine Institute, the Global Brain Health Institute, the Centre for the study of Advanced Materials and Bio-Engineering Research, and the Centre for Research on Adaptive Nanostructures & Nanodevices, among others. Trinity’s strong links with the European Space Agency and with NASA also provide unique opportunities for students to engage in cutting-edge space-related research.

Preparing Graduates for the Future

Trinity Science graduates are well prepared to take advantage of current and future scientific developments. They are equipped with the skills and knowledge to develop their careers in existing areas and in those fields yet to be developed. Approximately a third of our graduates become practicing scientists, in academia, industry or in clinical settings. A similar number go into aligned areas, such as teaching, medicine, science journalism, patenting law or forensic science. The remainder proceed to a diversity of careers not directly related to science but for which their scientific education makes them eminently suitable and highly sought after.

The curriculum design will foster in graduates the ability to think independently, communicate effectively, develop continuously and act responsibly.

Interested in reading more about science education?  Check out this article “Creativity in Science Education” challenging traditional approaches to STEM education delivery.  And continue the conversation with “Why do we want to teach science“, looking more at STEM  in primary and secondary level education in Ireland.