PHONE AWAY BOX – the healthy solution to excessive phone use 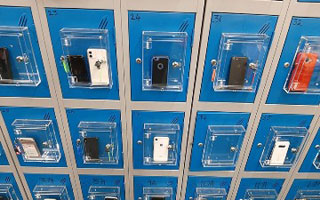 The Phone Away Box aims to discourage students from using phones during class-time to the detriment of their education. 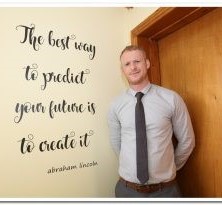 Mobile phones are not in themselves the problem – it is their misuse that causes concern. Students due to return to school in September are likely to be more attached than ever to their phones after 6 months of absence from the classroom. How easy is it going to be to break that habit?

Feelings of FOMO (Fear of Missing Out) have been around for centuries, but social media and particularly mobile phones have played a huge part in amplifying them for the current generation. Have you ever wondered why certain students go to the toilets 30-40 times during a school week? It may be due to a medical problem but more often it is an opportunity to check their phone.

Nor are we adults immune. How often do we find ourselves distracted by our mobile phone? When it vibrates or beeps in our pocket, do we have the discipline to ignore it or do we reach to check it?

Recently a principal told me that they had no problems with mobile phones in his school.
“If we see them, we take them, and we do not return them till the end of term,” he said.

The trouble with this kind of policy is that it creates and instigates conflict. Furthermore, no teenager in today’s world is going to do without a phone until the end of the term. You can be sure that the moment a teacher confiscates a phone, the student has already decided where and how he/she will get another one.

What is the Phone Away Box? 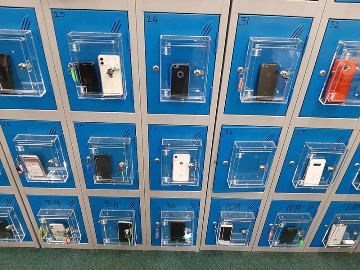 PHONEAWAYBOXES, the healthiest solution to the misuse of phones by students.

The Phoneawaybox is a transparent acrylic box that is attached to the front of students’ lockers in a bid to discourage them from bringing their phones to class and using them to the detriment of their education.

Students put their phones into their personal see-through boxes on the outside of their locker doors. Each box has a key that can be removed when the box is locked. At a glance, it can be seen which students have deposited their phones in the hallway locker boxes.

Phoneawaybox is a compromise, and the benefit of compromise is that it can inspire students to focus on why they are doing something rather than what they are doing. Self-determination theory asserts that people are more motivated when their underlying needs are considered. One of the most important human needs is autonomy, and autonomy is never more important than during the teenage years.

A Plan, Not a Ban

The best solution to any problem is the one that satisfies everyone’s interests. Are schools respecting or even trying to understand everyone’s interest? We don’t need the draconian attitude that mobile phones should be forbidden, and neither do we want a situation where there are no rules. What is required is a plan, not a ban.

Phoneawaybox respects a student’s right to have a phone before classes start and during lunchtime, and this is balanced by enabling discipline when it is time for work.

In the case of teachers who may wish their students to use mobile phones in class, they can simply sign a sheet in the staffroom stating the time of the phone-use class, thus making staff aware that the relevant Phone Away Boxes will be empty during that class period.

We must do better than support a regime that encourages students to hide their mobile phones or to have the attitude that ‘if I’m not caught it’s okay’. The time has come to create an environment that supports the values we want to see in our students: Responsibility, Discipline, and Commitment.

PHONEAWAYBOXES is not the only solution, but it may be the healthiest solution to the ever-increasing problem of excessive or untimely phone-use by students.