The greatest Transition Year project ever?

Four Transition Year students from Co Mayo are finalists in a competition to make the fastest miniature Formula 1 car in the world. 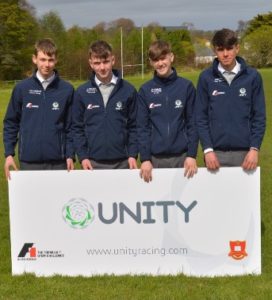 They’ve broken a world record; reached over 500,000 people in their social media campaign; generated €30,000 to participate in a major world competition; and raised €1240 for charity.

Richard Grimes (17), Sean Treacy (17), Cormac MacDermott (16) and Peter Timlin (16) have reached the finals in a competition to make the fastest miniature Formula 1 car in the world.

“It’s been our greatest year ever,” said Richard, “and even though Transition Year officially finished in May/June, we have continued working on our project throughout the summer.”

They will travel to Kuala Lumpur next month to compete against 44 other school teams in the F1 in Schools World Challenge finalalongside the Malaysian Grand Prix.

Formula One winners will receive full scholarships to London University as well as the prestigious Bernie Ecclestone trophy.

Leading Formula One figures will attend the final adjudication, and the winners will receive full scholarships to London University as well as the prestigious Bernie Ecclestone trophy.

In getting to this stage, the four – trading under the name of Unity Racing – can boast a breath-taking list of achievements: 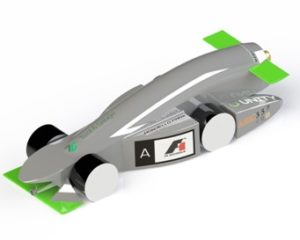 The miniature Formula One car created by Unity Racing team, St Muredach’s College, Ballina, Co. Mayo, which will form the centre point of their entry at the F1 in Schools world finals in Kuala Lumpur in September.

“All teams must design, manufacture and race the miniature F1 car while operating like a business – raising finances, marketing themselves and focusing on originality and innovation. The car is powered by a compressed Co2 canister and races on a straight 20m track in roughly one second It accelerates from 0-110kmh in 0.3 seconds.

“Marks are also awarded for engineering, verbal presentations, public relations and pit display. So we are hopeful that our major public relations campaign in Ireland over the last few months will help us to score points in Kuala Lumpur.

“Over 23,000 students worldwide took part in the F1 in Schools competition this year and it is wonderful to be at the final stage – and our aim is to bring home the overall title for our school and for Ireland.”

Added Richard: “We see ourselves building on this for our future studies and careers – we’ve learned so many skills, and so much about ourselves, that we feel are better able to make informed career choices down the line.”

The school’s business teacher and team mentor Karen Cronin hailed the “huge drive and cleverness” shown by the boys.

“They have worked really hard since the beginning. They’re a great bunch and they are so driven to win the world trophy,” she said.

More details on the project can be viewed on Unity’s website, unityracing.com