Frontiers of science need to connect with the school system, says S.Ananthanarayanan.

India has a large challenge of providing bare literacy to vast numbers. Even so, there is a case for making science education in schools more real and accessible. Connecting the school student with science, in the way it is done by professionals in research and industry, would open channels to the grasp of science principles and act faster than conventional pedagogy.

Initiatives of universities and research establishments in the USA, to bridge the widening divide between advanced science and the school and community, may have lessons for India to make use of its specialized science capability to maximize the value of a struggling educational system. 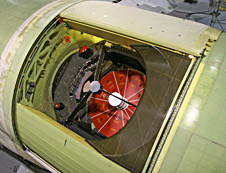 The German Built 100 inch telescope designed for best performance in the infra-red and the sub-millimetre range of the spectrum.

SOFIA is the Stratospheric Observatory for Infra-red Astronomy. This is a fully operational observatory aboard a modified Boeing 747, equipped with a 17 tonne, 2.5 metre (100 inch) telescope designed for the best performance in the infra-red and the sub-millimetre range of the spectrum.

Light in this region is completely absorbed by the atmosphere and is not accessible by ground-based telescopes. SOFIA flies at altitudes of 39,000 to 45,000 feet, which is clear of 99% of  atmospheric water vapour and absorbs light in the IR and sub-millimeter range. In this way, SOFIA complements the Hubble, Spitzer, Herschel and James Webb space telescopes and the major ground based telescopes.

SOFIA enables measurement of the sizes of non-luminous solar system objects by observing how long they are able to block out a distant star, and observing their composition and atmospheric structure. The 100 inch reflector has the resolution to observe detail of distant formations and help answer questions about the evolution of the universe, how organic molecules necessary for life may come about, and the nature of the black hole at the centre of the Milky Way. In the words of Dr Dana Backman of NASA:“Its much better than a mountain top observatory and cheaper and more convenient than a space telescope.”

While SOFIA is a state of the art facility for astronomers and space scientists, NASA extended its on-going outreach to an ‘airborne astronomy ambassadors’ program, by taking teachers of science and astronomy in schools on a 10 hour flight aboard SOFIA, to participate in real life astronomy research, shoulder-to-shoulder with professionals.  And it is planned to carry many more teachers during the current year and the next year. 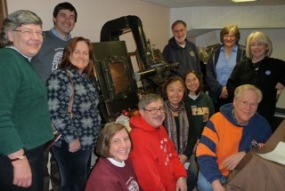 Yerkes Observatory
Margret ‘Peggy’ Piper, a high school teacher from Chicago, who participated in the SOFIA flight, said she also worked with astronomers and other teachers in the outreach programme of Chicago’s Yerkes Observatory. Yerkes involves students in its regular research projects and has an education programme, where it conducts workshops and provides teacher resources. Another such resource for first hand exposure to astronomy research is the International Astronomical Search Collaboration, where twelve universities, world-wide, work with high schools and colleges, at no cost to them.

In early Jan 2012, Peggy was part of the American Astronomical Society’s winter meeting, where she met and spoke with the press and visitors to explain what the SOFIA science flight was about and how the experience would impact and motivate students.

Excerpts from an interview over the telephone with this writer: 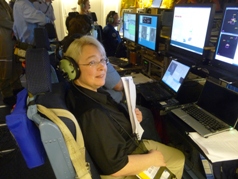 Margret ‘Peggy’ Piper, a high school teacher from Chicago, who participated in a 10-hour flight aboard SOFIA

Peggy:  “….we are called the Airborne Astronomy Ambassadors and our mission is to bring the things that we learn on board the SOFIA to our students and our community… the flight gave us first hand experience of what we teach. I was able to sit in the jump-seat behind the pilots for take off. That was incredible. The pilots explained what they were doing and the fact that they needed to stay pointed in a certain direction instead of heading towards a landmark. That is part of the science/technology I took back, it relates to my physics class where we do vector problems with airplanes and winds.”

A:  I see that you saw some physics in action

P: Yes.  That was just the beginning.  There was the concern with the amount of fuel, because flying at such great heights for so long requires a different calculation of the amount and mix of the fuel.  There is less atmosphere up there at 44000 feet, so less oxygen.

A:  Something of the ‘under the hood’ stuff of flying?

P: Exactly. After take off, I spent the rest of the flight with the scientists in the back. Part of the time was observing their work and understanding the process that needed to happen to obtain images. There is a group of engineers that controls the telescope and a group of engineers/astronomers that work with the camera and then a group that maintains the operations of the craft itself, things like opening and closing the door of the telescope. There was one astronomer on the plane and I followed his science. He was Bob Rubin studying the Saturn Nebula.  I read his abstract and asked him a lot of questions.  He was looking at the gases in the nebula for variations in hydrogen.  He was using the bands of the infrared as a spectrometer to determine where the H alpha lines where strongest.

A: How did it impact your understanding of astronomy research?

P: It brought my learning to life to see a professional at work. The camera was developed by a team at Cornell University and the principal scientist was on board because the camera was still newly installed. He also explained how his camera worked and the various ways of calibrating the images.

A: It was both astronomy and the technology of astronomy?

P: Yes!  There were at least 25 crew members, all doing different jobs to make this flight happen, not to mention the folks on the ground. Bringing back to the students the coordinated effort necessary was important. There were many meteorological insights as well that I share both with my physics, astronomy and meteorology students.  The thinness of the atmosphere and the sheer winds at that height are very real.  We learn about it, but being on SOFIA made it real.

A: Great, you saw ‘in the flesh’ what was in theory?

P: Yes! Then the great intangible is the fact that my students now have a teacher that has actually done these very real things.

A: You think the experience would make you a more credible and convincing, therefore more effective teacher?

P: It brings a certain respect and pride and inspiration for them to do more as well. Yes, definitely more credible.

A: You feel empowered?

P: Also more confident, so all that leads to ‘more effective’. Definitely empowered. I feel more able to do these things, and my students are more excited and confident that they can do authentic science in the scientific community, And it carries on, not just through me, but through my students and I believe my colleagues and the community. Regular people can participate in real scientific endeavours which they maybe thought were beyond them.

NASA’s science flight for teachers is only one instance of the awareness that science cannot stay insulated and keep receding from common people, faster and faster, like the expanding universe. In India, IR Astronomy is a long way off, there are millions who may never make it to primary school. But can we wait till good numbers are literate before we think of a formal science familiarizing programame? Drawing on universities, research centres and industry to consciously share technology with common people would bring in a feeling of inclusion and scientific temper without the intermediate of formal schooling. And doing this with teachers would be doubly beneficial, by filling the community with confident and credible ‘ambassadors’. The spin offs would be more science, economical living, population control and literacy.

The writer can be contacted at simplescience@gmail.com