Exhibition to commemorate 262 civilians killed in 1916

It is a little known fact that more civilians were killed during the 1916 rising than combined military personnel.

The civilians killed were ordinary people going about their day, caught in the crossfire. One of them was a little girl in a green jumper at a window, mistaken for a rebel and shot. 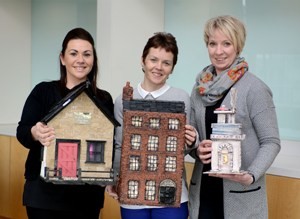 To commemorate the 262 innocent citizens killed, the 1916 Sackville Art Project has created individual beautifully crafted model houses built out of materials such as ceramics, wood, fabric and stone. Each of the 262 model houses is unique to the citizen represented.

The exhibition of these model houses opens on April 8 at the Botanic Gardens in Glasnevin, Dublin 9.

An illustrated book is also available containing pictures of all the houses, along with details about the civilians, the artists and the thinking behind each house to ensure the innocent civilians will never be forgotten again. Proceeds will be donated to the Peter McVerry Trust.

The 1916 Sackville Project is the brainchild of Ciara O’Keeffe, a ceramics artist living in Kildare.

“There’s this kind of association between a house, home, dwelling and the heart and what’s left behind, and it all merged into one. We said we would make a house that would be a ‘forever home’ for each civilian, that they would always be remembered.”

The exhibition at the Botanic Gardens runs from April 8-24 and is free to all visitors. Proceeds from voluntary donations will go to the Peter McVerry Trust.